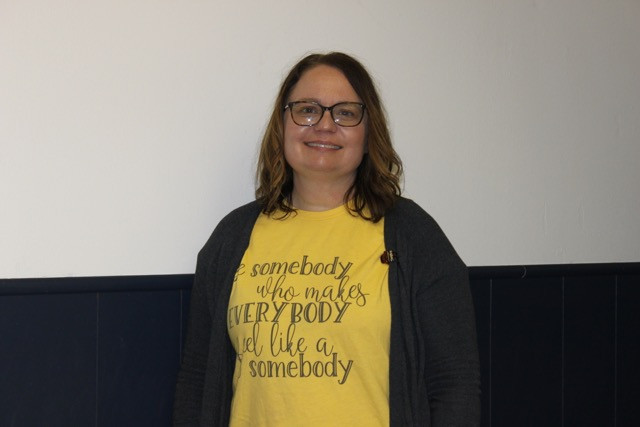 by Shiloh Appel | Published in the Redfield Press on January 6, 2022

Michelle Stuck, from rural Brentford has been hired as the Rural Advocate/Shelter Coordinator at the Family Crisis Center in Redfield.  With the Rural Advocate position she will travel weekly within Spink, Faulk and Hand County, will do presentations and assist victims of abuse as needed.  This position is for 20 hours a week that are reimbursed by the SD Network against Family Violence and Sexual Assault through a Rural Grant.  The remainder of the position as Shelter Coordinator will be working with donations, stocking and keeping the shelter in order as well assisting victims.

Michelle most recently was working at Wild Roots in Redfield, was owner/operator of Stuck on Scrapbooking in Brentford and in Redfield which was originally started to raise funds to make scrapbooks for foster/adopted children and military servicemen and women away from home.  This eventually went Nationwide.   She was the Northwestern Area School District speech and drama coach, preschool teacher and creator, Afterschool Program Director and substitute teacher for 15 years, worked as the YMCA Curriculum Coordinator and Home School Tester, and was a Lutheran Brethren Group Homeschool PreK-8th grade teacher.  She has trained staff at other schools on afterschool program protocols and has a degree in Human Development and Child and Family Services from SDSU.

She has held offices in the American Legion Auxiliary of South Dakota, National Committee on Lights On Afterschool in Washington, DC, mulitiple local and state board positions in the Brentford United Church of Christ, county and state 4-H Leaders Association Offices, Redfield Area Arts Council  and Grow Spink.  She and her husband Nathan have four grown children.

She joins Director Janelle Fortin as staff of the Family Crisis Center.  Michelle’s satellite offices will be at the First United Methodist Church in Faulkton on Tuesdays and on the third floor of the Court House in Miller on Wednesdays with the remainder of the time spent in Redfield.  Michelle may be contacted through her work cell phone of 605-468-0006 or the Hotline Crisis Line of 605-472-0508.